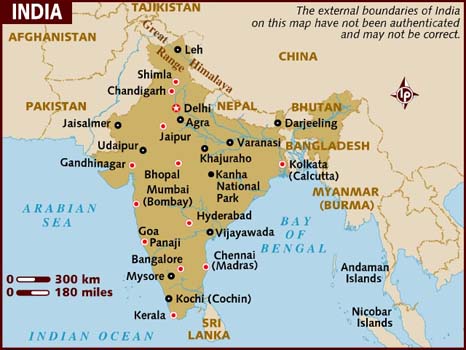 A map is a representation or a drawing of the earth’s surface or a part of it drawn on a flat surface according to a scale.

Atlases are of various sizes, measurements drawn on different scales.

When many maps are put together we get an Atlas.

Atlases are of various sizes, measurements drawn on different scales.

Maps showing cities, towns and villages, and different countries and states of the world with their boundaries.

Scale is the ratio between the actual distance on the ground and the distance shown on the map.

If you know the scale, you will be able to calculate the distance between any two places on a map.

When large areas like continents or countries are to be shown on a paper, then we use a small scale. It is called a small scale map.

When a small area like your village or town is to be shown on paper, then we use a large scale. It is called a large scale map.

An arrow marked with the letter ‘N’ at the upper right hand corner on most maps shows the north direction. It is called the north line.

We can find out other directions, for e.g. east, west and south.

It is an instrument used to find out main directions.

It is not possible to draw on a map the actual shape and size of different features such as buildings, roads, bridges,
trees, railway lines or a well.

With the use of symbols, maps can be drawn easily and are simple to read.

Maps have a universal language that can be understood by all.

There is an international agreement regarding the use of these symbols. These are called conventional symbols.

Generally blue is used for showing waterbodies, brown for mountain, yellow for plateau and green is used for plains. A sketch is a drawing mainly based on memory and spot observation and not to scale.

For e.g. If you are explaining way leading to your house to your dear friend.

A plan is a drawing of a small area on a large scale.

for e.g. : The length and breadth of a room, which can’t be shown in a map.