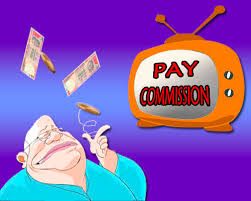 Pay Commission is set up intermittently by government of India, and gives its recommendations regarding changes in salary structure of its employees.

Since India’s Independence, seven pay commissions have been set up on a regular basis to review and make recommendations on the work and pay structure of all civil and military divisions of the Government of India. Headquartered in Delhi, the Commission is given 18 months from date of its constitution to make its recommendations

The first pay commission was established on January , 1946 and its submitted its report on May, 1947 to the interim government of India. It was under the chairmanship of Srinivasa Varadachariar.

The Government of India initiated the process to constitute the 7th Central Pay Commission along with finalization of its Terms of Reference, the composition and the possible timeframe for submission of its Report on September 25, 2013. Its recommendations are likely to be implemented with effect from January 1, 2016. Justice A.K Mathur will be heading the Seventh Pay Commission, announcement of which was done on 4 February 2014.
Salary increment 7th Pay panel suggests

Increase in pension will be 24%.

Financial burden Seventh pay commission will definitely bring a toll on the exchequer The reason being Government has to manage OROP’s expenditures too. FY17 impact seen at Rs 1.02 lakh crore from implementation of the 7th Pay Commission.

Implementation of 7th Pay Commission to impact fiscal deficit by 0.65%