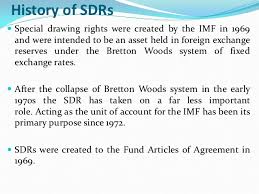 The SDR was created by the IMF in 1969 as a supplementary international reserve asset, in the context of the Bretton Woods fixed exchange rate system.

Its value is currently based on a basket of four major currencies, and the basket will be expanded to include the Chinese Renminbi (RMB) as the fifth currency, effective October 1, 2016. SDRs can be exchanged for freely usable currencies.

A country participating in this system needed official reserves—government or central bank holdings of gold and widely accepted foreign currencies—that could be used to purchase the domestic currency in foreign exchange markets, as required to maintain its exchange rate.

Only a few years after the creation of the SDR, the Bretton Woods system collapsed and the major currencies shifted to floating exchange rate regimes.

These developments lessened the reliance on the SDR as a global reserve asset. However, more recently, the 2009 SDR allocations totaling SDR 182.6 billion played a critical role in providing liquidity to the global economic system and supplementing member countries’ official reserves amid the global financial crisis.

The SDR is neither a currency, nor a claim on the IMF. Rather, it is a potential claim on the freely usable currencies of IMF members.

In addition to its role as a supplementary reserve asset, the SDR serves as the unit of account of the IMF and some other international organizations.

The value of the SDR was initially defined as equivalent to 0.888671 grams of fine gold—which, at the time, was also equivalent to one U.S. dollar.

After the collapse of the Bretton Woods system in 1973, the SDR was redefined as a basket of currencies.

Currently, the SDR basket consists of the U.S. dollar, euro, Japanese yen, and pound sterling. Effective October 1, 2016, the basket will be expanded to include the Chinese renminbi.

The basket composition is reviewed every five years by the Executive Board, or earlier if the IMF finds changed circumstances warrant an earlier review, to ensure that it reflects the relative importance of currencies in the world’s trading and financial systems.

Under its Articles of Agreement (Article XV, Section 1, and Article XVIII), the IMF may allocate SDRs to member countries in proportion to their IMF quotas.

IMF members often need to buy SDRs to discharge obligations to the IMF, or they may wish to sell SDRs in order to adjust the composition of their reserves. The IMF may act as an intermediary between members and prescribed holders to ensure that SDRs can be exchanged for freely usable currencies.

For more than two decades, the SDR market has functioned through voluntary trading arrangements. Under these arrangements a number of members and one prescribed holder have volunteered to buy or sell SDRs within limits defined by their respective arrangements.

The number of voluntary SDR trading arrangements now stands at 32, including 19 new arrangements since the 2009 SDR allocations.