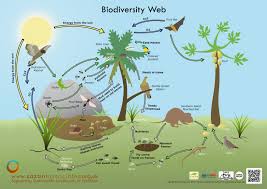 Plants and animals of a region constitute biodiversity. Biodiversity is a natural wealth essential for human survival.

Biodiversity could be classified as –

(a) Species biodiversity: It includes total number of different taxonomical or biological species. There are more than 200000 species in India of which several are confined to India (endemic).

(b) Genetic biodiversity: It includes land traces; horticultural varieties; cultivers, ecotypes (related types differing due to difference in the ecological condition); all within a biological species.

Rapid decline of biodiversity is a result of various causes.

(1) Loss of habitat: Due to the growing human population, wetlands are being made dry through landfills, as the demand for land increases. Natural forests are cleared for industry, agriculture, dams, habitation, recreational sports, etc. As a consequenceevery plant and animal species occupying that ecosystem is temporarily or permanently affected. So are the migrating birds or other animals visiting that habitat. Thus, the population of different species occupying that habitat become unsettled. An altered ecosystem causes changes in the neighbouring ecosystems.

(2) Pollution: Pollution also alters the habitat to such an extent that it becomes critical for survival of some of the species. For example, pollution that leads to green house effect results in global warming. All those species that are slow to adjust to the changed environment are eventually lost.

(3) Overuse: Whales for oil, fish for food, trees for wood, plants for medicines etc. are being removed by humans at higher rates than they can be replaced. Excessive cutting of trees, overgrazing, collection of fire-wood, hunting of wild animals for skin (for example tigers from reserve forests of India), ivory etc. all result in gradual loss of species.

(4) Introduction of foreign species: With growing volume of international travel accidental introduction of species into a new or foreign area has become easier. There are many species which have invaded new areas to which they were introduced unintentionally. Many of the new species introduced into new regions thrive at the expense of native species. For example: Parthenium, Argemone and Lantana are the common weeds of foreign origin in our country.