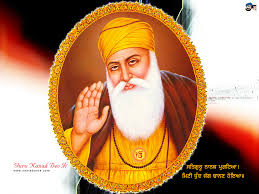 Guru Nanak (15 April 1469 – 22 September 1539) was the founder of Sikhism and the first of the ten Sikh Gurus. His birth is celebrated world-wide as Guru Nanak Gurpurab on Kartik Pooranmashi, the full-moon day in the month of Katak, October–November.

Guru Nanak has been called “one of the greatest religious innovators of all time”, who was “an original spiritual thinker who expressed his thoughts and experiences via extraordinary poetry”, that now forms the basis of Sikh scripture, Guru Granth Sahib.

Guru Nanak preached the new idea of God as “Supreme, Universal, All-powerful and Truthful, Formless (Nirankar), Fearless (NirBhau), Without hate (Nirvair), the Sole, the Self-Existent, the Incomprehensible and the Ever-lasting creator of all things (Karta Purakh), and Satnam (the Eternal and Absolute Truth).

Guru Nanak’s words are registered in the form of 974 poetic hymns in the holy text of Sikhism, the Guru Granth Sahib, with some of the major prayers being the Japji Sahib, the Asa di Var and the Sidh-Ghost.

His successor was Guru  Angad.