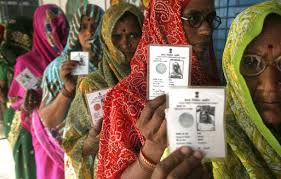 Women’s suffrage (also known as woman suffrage or woman’s right to vote) is the right of women to vote and to stand for electoral office.

The Women’s Indian Association (WIA) was founded in 1917. It sought votes for women and the right to hold legislative office on the same basis as men. These positions were endorsed by the main political groupings, the Indian National Congress and the All-India Muslim League.

British and Indian feminists combined in 1918 to publish a magazine Stri Dharma that featured international news from a feminist perspective.

In 1919 in the Montagu–Chelmsford Reforms, the British set up provincial legislatures which had the power to grant women’s suffrage.For eg. Madras in 1921 granted votes to wealthy and educated women, under the same terms that applied to men. The other provinces followed, but not the princely states.

Punjab the Sikhs granted women equal voting rights in 1925 irrespective of their educational qualifications or being wealthy or poor. This happened when the Gurdwara Act of 1925 was approved.

In the Government of India Act 1935 the British Raj set up a system of separate electorates and separate seats for women. Most women’s leaders opposed segregated electorates and demanded adult franchise.

In 1931 the Congress promised universal adult franchise when it came to power. It enacted equal voting rights for both men and women in 1947.

Feminism in India is a set of movements aimed at defining, establishing, and defending equal political, economic, and social rights and equal opportunities for Indian women. It is the pursuit of women’s rights within the society of India.

It is the pursuit of women’s rights within the society of India. Like their feminist counterparts all over the world, feminists in India seek gender equality: the right to work for equal wages, the right to equal access to health and education, and equal political rights.

Indian feminists also have fought against culture-specific issues within India’s patriarchal society, such as inheritance laws and the practice of widow immolation known as Sati.

The history of feminism in India can be divided into three phases:
The first phase- Beginning in the mid-nineteenth century, initiated when male European colonists began to speak out against the social evils of Sati.
The second phase-1915 to Indian independence, when Gandhi incorporated women’s movements into the Quit India movement and independent women’s organisations began to emerge.
The third phase- Post-independence, which has focused on fair treatment of women at home after marriage, in the work force and right to political parity.

Constitutional Guarantee:
The constitution of india guarantees to all women, equality [article 14]; no discrimination by the state [article 15 (1)]; equality of opportunity [article 16]; equal pay for equal work [article 39(d)]; renounce practices derogatory to the dignity of women [article 51 (a) (c)] the constitution also allows the state to make special provision in favor of women and children [article 15(3)]; and securing just and humane conditions of work and maternity relief [article 42].

UN’S take on issue
The United Nations General Assembly adopted the Convention on the Political Rights of Women, which went into force in 1954, enshrining the equal rights of women to vote, hold office, and access public services as set out by national laws.

FlipKart is offering upto 70% off on Mobile Accessories.Buy 2 Get 5% off: Automatic discount in cart

Amazon is offering upto 60% off on Computer Components.Free delivery on ALL orders: Amazon PrimeClic

Amazon is offering 25% off or moreÂ on Lifelong Personal Care & Health Appliances.Free delivery

Amazon is offering 25% off or more on Feminine Hygiene.Free delivery on ALL orders: Amazon PrimeClic

Amazon is offering 50% off or more on Somil Home & Kitchen Products.Free delivery on ALL orders:

Amazon is offering 50% off or more on Sehaz Artworks.Free delivery on ALL orders: Amazon PrimeClick

Pre-book with a gift card of Rs. 1000 or more and get additional Rs. 1000 back as Amazon Pay Balance