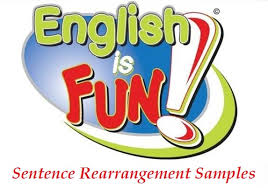 Rearrange following sentences to form a meaningful paragraph.Comment your answers.

A.This linking of politics and music is of course ancient and even Aristotle in his book ‘Politics’ said, “We may compare the best form of government to the most harmonious piece of music.”
B.Mixing metaphors, Mr. Clinton referred to the symphony so central to western music and said, “It is time both nations heard the musical compositions of each other and understood each other better.”
C.The oligarchic and despotic to the more violent tunes; and the democratic to the soft and gentler airs.
D.The US President was confident that if governments and people of the two democracies made a determined bid to understand each other’s perspectives scripts, they could create new symphonies.
E.Such attempts to secure symphony would be so much better than the individual bids for virtuoso improvisations and adherence to classical compositions.

(A)He felt that his honest ways were responsible for the poverty and starvation of his family.
(B) Sixteen miles away from Mysore, there is a dense forest.
(C) He told them how his honesty was useless and asked if he should try an alternative.
(D) They told him that they would prefer starving to dishonesty.
(E) Once there lived a poor but honest woodcutter in the forest.
(F) So he wanted to discuss his feeling with his wife and children

(A) But seriously, how much would you pay to know what thoughts are swimming around in someone else’s head?
(B) In most fictional movies thus, the idea of reading minds-of seeing the private intentions of another, and the possibility of intervening in those plans-has always been highly attractive.
(C) Such fantastical questions have long been the bread and butter of fiction.
(D) Today, more than four centuries since the phrase, “A penny for your thoughts?” was first recorded,
(E) The going rate for a “thought”-a probe into the thinking of another-was once quite a bargain.
(F) And if you could really know their truthfulness how much more would you pay?
(G) Even with the sliding value of the dollar, this still seems quite a bargain.

(A)Another of his start-ups was sold to Google.
(B)He founded the first company to sell virtual reality products.
(C)But unlike most of his fellow technologists, he eventually came to feel that the rise of digital networks was no panacea.
(D)He was there, more or less, at its creation.
(E)Shashank has an unusual authority to criticize the digital economy:

A. Mavericks such as Bill Gates of Microsoft and Howard Schultz of Starbucks, who may not have fit easily into established companies, succeeded at building their own unique empires.
B. The free market often seems better at recognizing and promoting individual leaders than large organizations.
C. With all these emerging leaders, the time has come for small companies to enjoy some time in the spotlight.
D. They, and others like them, stand out as heroes in the business world.
E. Indeed, a research company has found that most of the job growth in the United States this decade has come from small companies.

A.  The officer has been sitting over his application for a power connection for several months now.
B.  Sitting through a 3-hour boring drama is not an easy task from any angle.
C.  Since Ronu’s mother had not returned yet, she was sitting on the door.
D.  The sitting Member of Parliament is most likely to be given the party ticket for this Lok Sabha constituency.
E.  This psychiatrist normally provides four sittings for the purpose of counselling the patient.

(A)Alexander Bain, Scottish clockmaker, patented the electric clock.
(B)The next development in accuracy occurred after 1656 with the invention of the pendulum clock.
(C)Clocks have played an important role in man’s history.
(D)Spring-driven clocks appeared during the 15th century, although they are often erroneously credited to Nuremberg watchmaker Peter Henlen around 1511.

A) Moreover, salaries in public sector enterprises are not as competitive as those offered by private or foreign corporate.
B) This trend should be a wake-up call for stakeholders to examine why employee are seeking better opportunities with private companies in India and abroad.
C) Public Sector Enterprises (PSEs) have been experiencing severe challenges in attracting, motivating and retaining their key staff.
D) Having identified these as the reasons why employees leave PSEs, it is important to empower stakeholders to find ways to remedy the situation.
E) One reason is that young employees lured away by private firms are more willing to undertake professional risks.
F) Employees in specialist roles especially have become increasingly difficult to retain.

(A)The leading god fought the monster, killed it and chopped its body in to two halves.
(B)A terrible monster prevented the gods from separating the land from the water.
(C) All the land was covered by the ocean.
(D)The god made the sky out of the upper part of the body and ornamented it with stars.
(E)The god created the earth from the lower part, grew plants on it and populated it with animals.
(F)The god moulded the first people out of clay according to his own image and mind.

FlipKart is offering upto 50% offÂ + upto Rs. 13250 off (Exchange) on Mobiles.Smartphones – Free You

FlipKart is offering minimum 35% off on Gaming.ICICI Bank Credit Cards – 10% off upto Rs. 750 on Pur